Rumor has it that potty training girls is easier and faster than potty training boys. And for the most part, it’s true. Experts attribute this to the fact that little girls tend to be more advanced in physical and language development — both skills that help move the potty training process forward. However, this doesn’t mean that boys are destined to take longer when potty training.

What really impacts your child’s potty learning journey is their unique personality and behaviors. So, if you’re looking for the easiest way to potty train a little girl or boy, read on for some important tips. 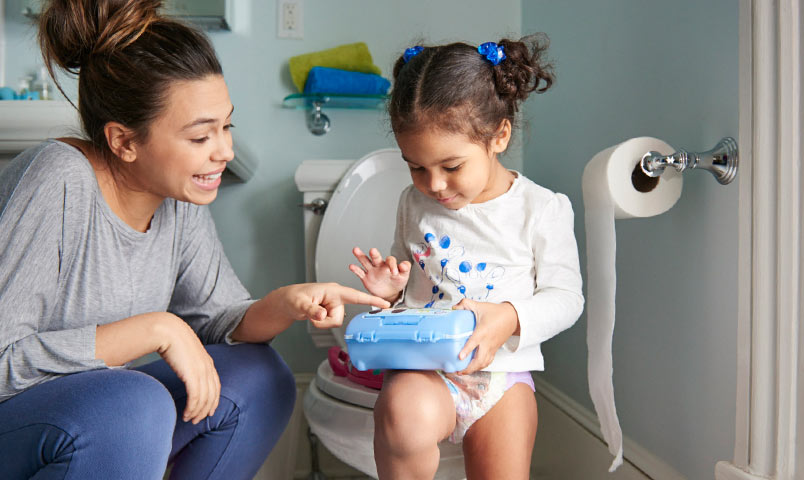 The ease of training primarily depends on the child and their level of readiness, says parenting expert Michelle LaRowe, an author, professional nanny and editor in chief of eNannySource.com. Our Potty Training Readiness Quiz can help, and you can also watch for these signs.

LaRowe has found girls are often ready to train earlier. Boys, she notes, “have to learn to standand sit.” Plus, they “generally mature later than girls.” Other experts suggest that boys start training by sitting since standing to pee is a more advanced skill.

Once boys are ready to start peeing while standing up, Dad or a big brother can help by demonstrating how it’s done. Also, there are some tried and true potty training tips to help them aim into the toilet. Try putting blue coloring in the bowl, which will turn green when the urine accurately gets into its target. You can also float some O-shaped cereal in the toilet bowl or potty chair and have your boy aim for them.

Getting your son’s aim right isn’t just a good thing for him — it can also save you a whole lot of cleaning hassle too. If you’re outside and no one’s around, you might try letting him pee in the grass — or better yet, “write” in the snow. That can take the pressure off aiming for the first few times he pees standing up.

Gary Cave, father of both a boy and a girl, admittedly did have an easier time training his girl, but he’s not convinced it has to do with gender.

“As a parent of a 3-year-old girl and a recently turned 2-year-old boy, I have had my fair share of experience with all things potty! Our oldest, Saffron, was relatively easy to train, although it did take around 4 months.

Our younger boy, Lucas, is just starting his potty training journey and we have already noticed that he is reacting very differently to it. It looks as though we will be in for a far tougher time with him. I have friends with boys and girls who have told me that their boy was easier to potty train, so I personally do not believe that any gender is easier than the other. There are many other factors at play.”

It all comes down to the individual child, agrees Maria Velasquez who has both a son and a daughter. While it’s not common, her 2½-year-old son trained in just a few days.

Because her son was so easy, she falsely believed it would be even easier with her daughter. Not so! “My strong-willed daughter took much longer and multiple failed attempts where we took week-long breaks in between,” she recalls. “Once she decided SHE wanted to learn, it took about two weeks to be accident free. I wish I had known that every child is different, and these differences play a big role in potty training.”

Potty Training Tips for All Kids

Whether you’re potty training a boy or a girl, there are some universal tips .Consider this list of ideas too:

If you start too soon, you’re just going to have a longer (and probably much more tiring!) experience ahead. Also, know that kids don’t usually learn to pee and poop on the potty at the same time. If they’re interested in just one, encourage them. Then they can translate that new skill and confidence into the other potty practice.

While there is no shortage of tips for parenting, when it comes down to it the only guarantee is that your own experience will be as unique as your child. Keep this in mind — and above all, be patient! Potty training will happen. And when it does, you and your child will have something big to celebrate for sure!