Potty training can be tough. And it can be a special challenge when there is a sibling in the house, whether it’s a newborn baby or an older brother or sister. So, what should you keep in mind when you’re starting potty training if you have another child in the house? And how can you make the most of those sibling relationships to encourage your child’s potty training success? 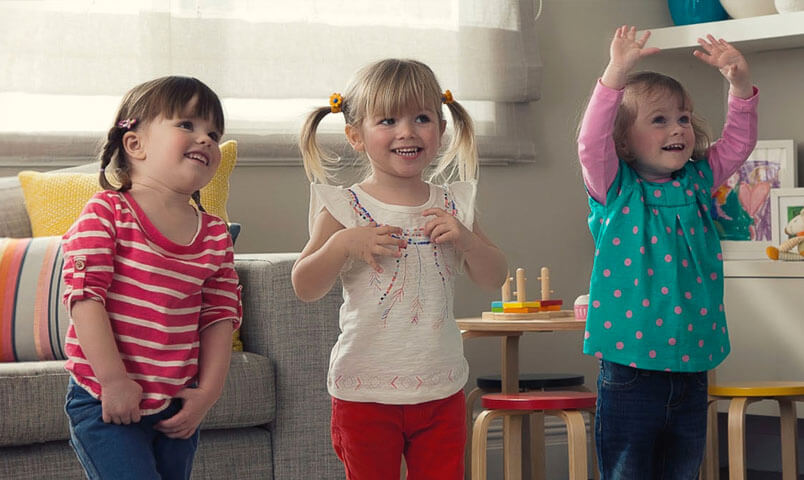 A Big Brother or Sister Can Encourage Potty Training

An older sibling can set a good example of how to use the bathroom. After all, what toddler doesn’t want to emulate their big brother or big sister? Use this to your advantage, encouraging your little one to watch their big sibling’s potty rituals, even going so far as to have them sit on their own potty when big bro or sis is going to the toilet.

Consider making it a game they can play together by following our instructions for the Can You Do What I Do? potty training game. And make sure you celebrate when either child is successful so the child-in-training gets to share in the spotlight.

If you’ve already potty trained an older sibling, keep in mind that all kids are different. Don’t expect your second or subsequent children to be ready for potty training at the same age as your first child — they could be ready earlier or later. Watch for these potty training signs to know they’re getting interested including:

Also, keep in mind that boys and girls have different experiences with potty training. Girls are typically done potty training earlier than boys, but that isn’t always the case. Some girls take a little longer, and some boys experience fast potty training. It all depends on the individual child and their personality. Of course, you can help encourage them on the potty training journey by making it fun!

If you have a younger sibling in the house, finding the time to potty train can add an extra challenge — that’s a busy scenario for any parent. Remember that an occasional accident and even some regression is a normal part of the meandering potty training journey.

While some children have success potty training with a new baby in the house, some parents may wish to pause and wait for a less-hectic time. The birth of a sibling is one of 10 suggested reasons to hold off on potty training along with transitioning from a crib to a Big Kid bed and starting or moving to a new daycare.

When there is a newborn in the house, your older child may revert to being the baby once again to get your attention, explains Emily Rittenberg, mother of two and founder of the  Rochester Parenting Coach.

“When we potty trained our older son, our youngest was a newborn. Going potty was an additional way to reinforce and celebrate him being a ‘big boy,’” she says. It worked for him, but she notes, “Some potty training regression is normal when introducing a new baby to the family (or any other major life transition), so don’t be alarmed if potty training ends up taking a little longer and has some ups and downs.”

Rittenberg suggests celebrating the positive, such as telling you when they have to go, trying to go, pulling their pants up/down by themselves and washing hands. Be warm and caring when they have an accident.

Clinical psychologist Bobbi Wegner knows that having a new baby in the house can be an adjustment for the entire family, especially a potty training child who is “working to figure out if they are a baby or a big kid.” She potty trained two children with a new baby in the house. “Not ideal but totally workable with the right attitude. The parents’ role is to provide structure, guidance and positive reinforcement. And that includes accepting accidents and bouts of regression during major life changes, which is totally normal.”

“Our son would say ‘I’m a big boy!’ and then be found lying in the baby’s Moses basket, which totally represented what he was working through: ‘Am I a big boy or a baby? Which one do I want to be?’ Ultimately, it worked best when we stayed patient with him and didn’t force it.”

It was much easier, she said, to train her youngest child with two big brother role models, says Wegner. “They practically potty trained her by just doing their usual business,” she recalls. “Quite honestly, I would have preferred to wait until a little later to do the training, but our daughter was ready and interested because she had been watching her brothers, so we had to strike while the iron was hot! As the baby of the family, she happily responded to the ‘what a big girl’ applauds, and the training was pretty quick.”

If you’re potty training twins or multiples at the same time, resist comparing their success. Each child develops at a different rate, and low-key praise instead of rewards will help your kids feel encouraged instead of compared. Treat each of your children as individuals and celebrate each of their own personal milestones including potty training.

Whatever your family situation, potty training can be packed with fun moments — and some pretty challenging times too. Above all, keep a positive attitude for yourself and your potty training child. Respect their own individual progress and keep cheering them on at every step with words, little rewards and a whole lot of hugs and high-fives.

More In When To Start